A long but informative article on the history of the pertussis vaccine. If you still believe that the main goal of pharmaceutical companies is to create effective and safe drugs, this article might make you see things differently; we highly recommend reading it!
- The pertussis toxin is added to the whole-cell vaccine. This toxin increases the permeability of the blood-brain barrier, rendering this barrier more penetrable to other toxins and viruses. In fact, the pertussis toxin itself is a neurotoxin.
- Since the 1930s, it has been known that the whole-cell pertussis vaccine (DTP) is somewhat dangerous and can lead to neurological consequences.
- Since the 1950s, scientists analysed DTP vaccine toxicity in mice, evaluating toxicity based on mice survival and weight. In 1963, it became apparent that there was no correlation between the results in mice and the number of neurological consequences in children.
- In addition to the pertussis toxin (an exotoxin – a toxin that is secreted by a living bacterium), the vaccine component itself contains an endotoxin (a toxin released from a bacterium only after its decay). This endotoxin, whose presence was carefully concealed by the vaccine manufacturers, is in fact, very toxic.
- In an article from 1953, it was stated that practically every vaccinated child suffered systemic intoxication, with often permanent CNS lesions.
- The first acellular vaccine appeared in 1937. While it was widely used in the 1940s, it was later discontinued as the company did not want to invest in clinical trials. In the 1960s and 1970s, other acellular vaccines were widely used, but also got withdrawn from production due to their higher costs.
- After two babies died from vaccination in Japan, the Japanese developed the acellular vaccine that has been used since 1981.
- Sweden banned the whole-cell vaccine in the late 1970s. From 1970 to 1985, no child died of pertussis.
- In Tennessee in 1979, four children died after being vaccinated with the same lot of the pertussis vaccine. At this point, the CDC discovered that the vaccine was associated with sudden infant death syndrome (SIDS). While the director of the vaccine department of the FDA was on vacation, the FDA decided to withdraw the entire lot from circulation. However, when the director returned, he ordered that the whole lot be returned for distribution, apologizing to the pharmaceutical companies and promising them that it would not happen again. After this incident, manufacturers stopped sending entire lots to the same place, and instead, began distributing each lot throughout the country.
- This paper is also about how the pertussis vaccine led to the approval of a law for compensating victims of vaccinations. It also mentions how the Department of Health does everything possible to not compensate the injured, how almost all vaccine experts have a conflict of interest, and how the experts of committees investigating vaccine side effects are selected, and much more. The United States switched to the safer, acellular vaccine in 2001, 60 years after it was developed, and 20 years after Japan started using it. Nonetheless, not only is the whole-cell vaccine still licensed in the US, but pharmaceutical companies still sell the vaccine to the WHO, who then distribute it to other countries whose residents are improperly informed about the potential risks.


In March 1992, 8 infants in Taiwan died within 36 hours of their DTP vaccination. Seven of them received vaccines from the same lot (which accounted for 58% of the vaccines used at that time), which prompted the authorities to suspend the vaccination of that lot.
The authors analyzed the cases of SIDS in Taiwan between 1996 and 2013 and concluded that the risk of sudden death after DTP is 60% higher in girls within two days of vaccination. The authors conclude that the vaccine probably only accelerated the deaths of these girls for a couple of days, and they were already destined to die from SIDS, just a little later than they actually did.


Twins (3.5 months age) received a second dose of DTP and OPV and the first dose of hepatitis B vaccine. They had fever and were given paracetamol. Two days later, both died in their sleep lying on their backs. It was determined that their death was not related to vaccinations, and that they died of an unknown reason.


Twins died simultaneously 3 hours after a DTP vaccination. The authors conclude that this happened after the vaccination by a coincidence, that according to their calculations 9 infants a year are expected to die accidentally within 24 hours after the vaccination in the UK, and that the risk of SIDS in twins is 3 times higher. They point out that the number of reported deaths has not reached the projected number.
In 20 years, only 6 deaths after DTP have been reported, but there have probably been other cases. In the 14 months following this high-profile case, 5 deaths were reported within 24 hours of vaccination.


The authors researched the mortality rate following administration of two hexavalent vaccines (Infanrix Hexa and Hexavac) in Germany. For children in the second year of life, the mortality rate within 24 hours of Hexavac was 31 times higher than expected.
The authors note that the number of cases of SIDS occurring a few days after vaccination is likely to be underestimated, as these cases are not reported to the Paul Erlich Institute (which documents cases of vaccination adverse events). For example, only one of the six SIDS cases that occurred within two weeks after hexavalent vaccination was reported. This case occurred within 24 hours after the vaccination.

Sudden unexpected deaths and vaccinations during the first two years of life in Italy: a case series study. 2011, Traversa, PLoS One


Unlike the previous study, a study of 3 million infants in Italy found no connection between hexavalent vaccine and SIDS in the second year of life. Instead it found that the risk of SIDS during the first week after Hexavac was 2.8 times higher, the risk of SIDS after the first dose of any hexavalent vaccine was 2.2 times higher, and the risk of SIDS during the week after the first dose of any vaccine was 1.5 times higher than in the control group.
The control group consisted of the same infants that were vaccinated, just before they were vaccinated and 14 days after. That is, if an infant died on the 15th day after the vaccination, his death would increase the likelihood that the vaccine was not related to SIDS, since that infant already would be a part of the control group.


Beta-tryptase is an enzyme that is secreted from mast cells (a type of white blood cell). This enzyme is a marker of anaphylactic shock.
The authors analyzed the plasma of infants who died from SIDS and found that their beta-tryptase levels were significantly higher than those of infants who died with another diagnosis. They conclude that anaphylactic shock may be the cause of SIDS. More: [1] [2]


In six SIDS cases that occurred within 48 hours of being vaccinated with a hexavalent vaccine, autopsies were performed in Munich Institute. 5 of the infants were vaccinated with Hexavac and one with Infanrix Hexa. In addition to neuropathological and histological abnormalities, an unusual swelling of the brain was evident in all cases.
Brain weight gain due to edema or hyperemia (overflow of blood vessels) is mainly observed after DTP vaccination. Two of the three tested for tryptase showed very high levels.
The authors conclude that after the introduction of hexavalent vaccine, the number of SIDS deaths immediately after vaccination increased 13 times.

Infant mortality rates regressed against number of vaccine doses routinely given: Is there a biochemical or synergistic toxicity? 2011, Miller, Hum Exp Toxicol 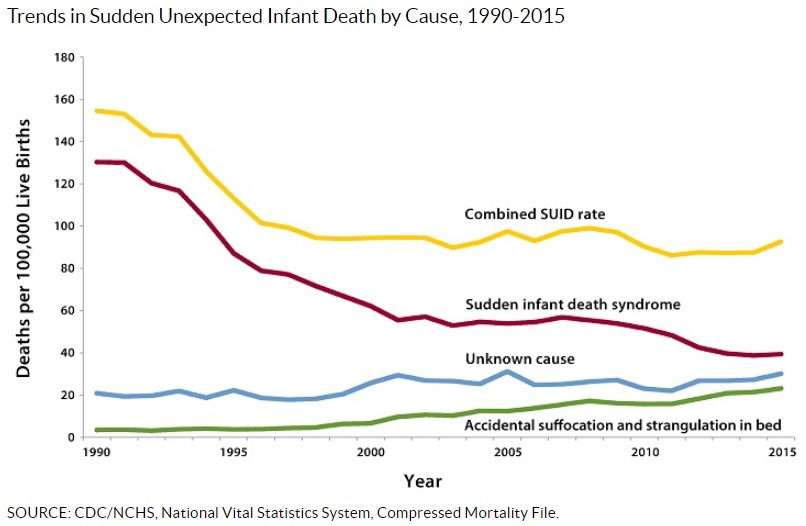