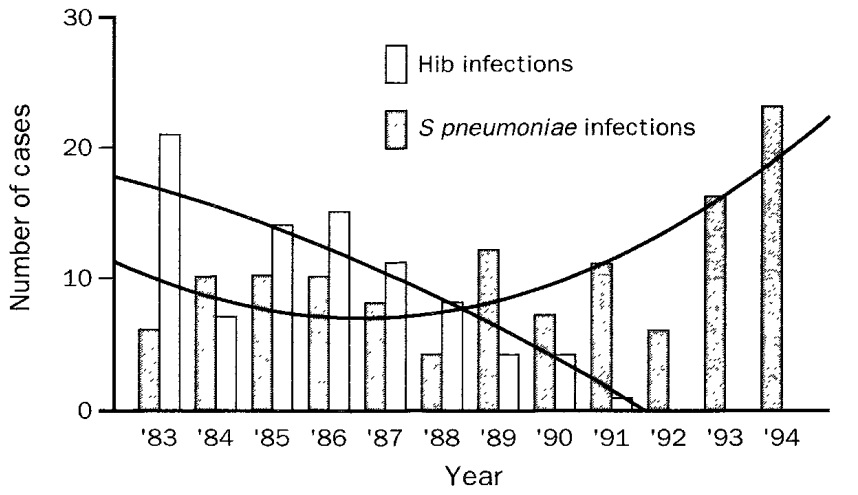 Inhibitory and Bactericidal Effects of Hydrogen Peroxide Production by Streptococcus pneumoniae on Other Inhabitants of the Upper Respiratory Tract. 2000, Pericone, Infect Immun


In those who got pneumococcal vaccines, there are fewer pneumococcal bacteria of non-vaccine serotypes in the upper respiratory tract, but more H. influenzae and staphylococcus, as well as much more anaerobic bacteria. Some of these bacteria are known to increase the risk of otitis media. Temporary bacterial imbalance also increases the risk of otitis media.
Those taking antibiotics had 4 times fewer corynebacteria and Dolosigranulum, but 6.3 times more staphylococcus.


After the start of vaccination, the colonization of vaccine serotypes decreased significantly, but it increased for non-vaccine ones. H. influenzae bacteria were found in vaccinated people 2-5 times more often than in unvaccinated ones. (Sao Paulo, Brazil)


Between 1995 and 2003, the incidence of AOM did not change, but the incidence of protracted AOM decreased from 16% to 12%. Pneumococcus in cases of AOM was replaced by H. influenzae, which after the onset of pneumococcal vaccination became the main causative agent of the disease. (Rochester, New York)


The previous study is widely cited, and it is not necessary to even mention that statistical significance was absent. It is also not necessary to mention other studies where the incidence of otitis media in vaccinated individuals has been increased.
In addition, it is reported that the colonization of pneumococcus during otitis media has not changed, since vaccine serotypes have been replaced by non-vaccine ones.
The bacterium M. catarrhalis was found more often in the middle ear in vaccinated children, compared with unvaccinated ones.
Of the three types of bacteria (pneumococcus, hemophilic bacillus and M. catarrhalis), an average of 1.37 bacterial species were found in unvaccinated, 1.48 in partially vaccinated, and 1.67 in vaccinated.